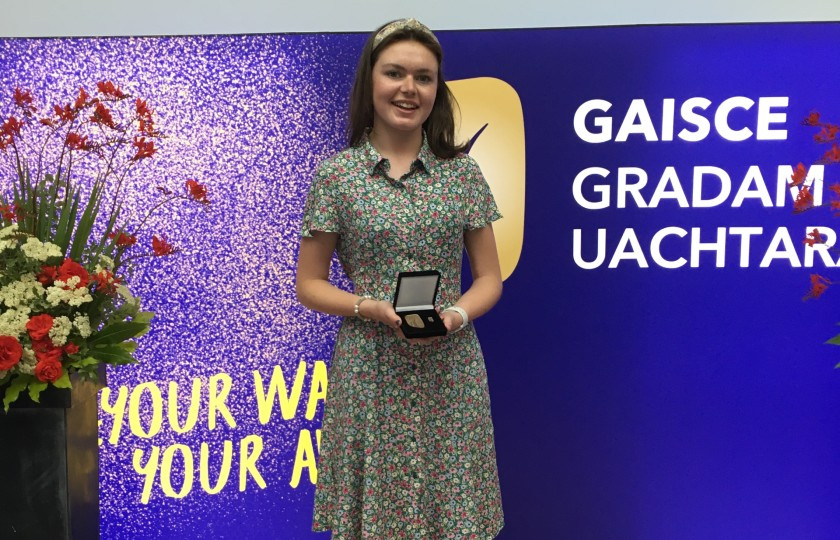 A Mary Immaculate College (MIC) student has been awarded the Gold Gaisce medal by President Michael D Higgins at a special event at Áras an Uachtaráin. Second year Bachelor of Education in Education & Psychology student Sarah Ryan Purcell was one of 79 people from across Ireland to be presented with the prestigious award by the President in recognition of their commitment to volunteering and personal development.

To achieve the award, Sarah, who is from Blackrock in Cork, completed 52 weeks of piano, 52 weeks of the role of cantor in her local church, 78 weeks of tennis, a four-day hike along the Ballyhoura Way and a summer internship at the University of California Santa Cruz, where she participated in research in child psychology.

Sarah had previously been awarded the Gaisce Bronze Award during her Transition Year at Scoil Mhuire in Cork and jumped straight to Gold medal, which meant completing an additional 26 hours of a challenge area – in Sarah’s case, tennis – in lieu of completing her Silver award.

Reflecting on her time completing the award, Sarah said: “It was a life-changing experience, affording innumerable opportunities for personal development. I would encourage all young adults to give it a go! The Gaisce programme, which encompasses physical recreation, community involvement, development of a personal skill, and the residential project and adventure challenge, promotes active citizenship and healthy lifestyles. By partaking in the programme, in the words of Brendan Kennelly, we are ‘creating ourselves’.” 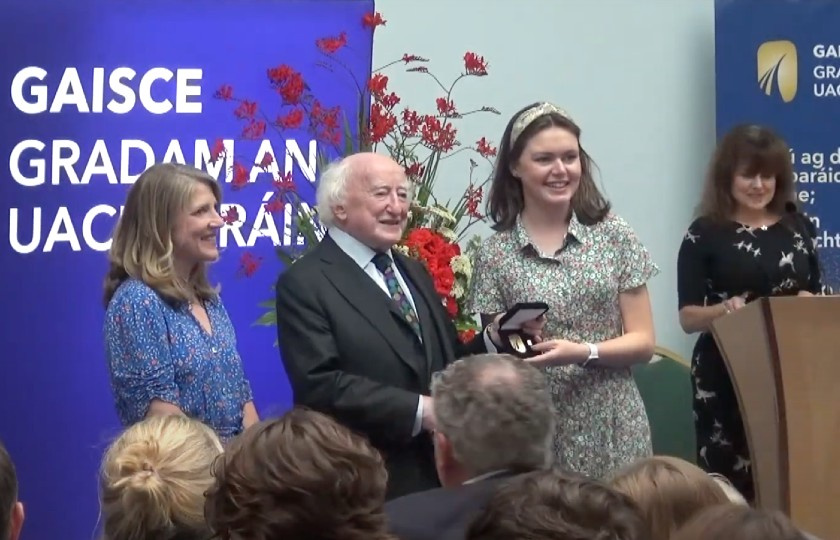 Sarah’s residential project saw her undertake a placement in the Child Psychology lab of the University of California, Santa Cruz, which she says was a remarkable experience. Recounting her time there, Sarah says: “Just three years ago, I could never have imagined myself heading off alone to California for two months to partake in a science internship programme, and yet I was there in the summer of 2019! I have always been a home-bird but I surprised myself with my eagerness to travel independently and seek out new experiences, I worked alongside Dr Elizabeth Goldman and aided her in her research into child-robot interactions. Through a variety of carefully-designed tasks, we investigated whether children perceive robots as living things…they do! The benefits of my residential project cannot be put into words. I came back a different person, after spending eight weeks with like-minded students with whom I have so much in common.”

Aside from the two-month placement, most activities could be spread over an hour a week for a year. By contrast, the adventure element must be completed in one-go and Sarah admits this this was the most challenging component of the award. She says: “My organisation, management, critical thinking and indeed navigation skills were put to the test. This journey consisted of an 85km hike along the Ballyhoura Way which we completed over four days. Due to COVID, our first year of College was held online so I had never met my college classmates. And so, as Class Rep, I wanted to help everyone get to know each other and so I invited classmates to join me on the trail. The best way to make friendships is to face a common challenge and I can tell you that this adventure was certainly that! There were so many hiccups along the way but these obstacles only contributed to the sweet sense of accomplishment at the end of the journey.”

Sarah has just finished her second year of study on the B Ed in Education and Psychology, a four year, Level 8 degree which prepares graduates to be primary teachers and obtain a degree in Psychology. Although her college journey began virtually due to COVID, Sarah embraced the challenges and immersed herself in college life. She was elected Class Rep for her cohort, joined the student radio station Wired FM and took up the Presidency of the MIC Tennis Club. Most recently, Sarah was elected as the Mary Immaculate Students’ Union (MISU) Irish Language Officer for the upcoming academic year. Deir sí: “Tá an-ghrá agam don Ghaeilge agus táim ag tnúth go mór leis an teanga a spreagadh ar fud an choláiste agus sa seomra ranga amach anseo.”