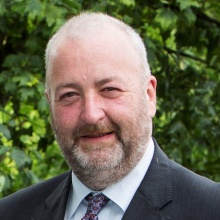 Professor Michael Healy is the Vice-President for Research at Mary Immaculate College. He graduated with a BA and a MA from University College Cork, and completed a H Dip Ed before going on to study for his PhD from the National University of Ireland. As a Physical Geographer, his doctoral research focused on Holocene relative sea-level recovery in southwest England, and his subsequent research work concentrated primarily on paleo-environmental reconstruction of coastal environments and coastal zone management.

He has been published in international peer reviewed journals as well as being editor of a number of books. He is a peer reviewer for international journals including Marine Geology and the Journal of Coastal Research. He has held a number of roles as External Examiner and Moderator for postgraduate programmes and theses. Having lectured in Ireland and in the United Kingdom, he joined Mary Immaculate College as Lecturer in Physical Geography. He went on to hold a number of academic administrative posts at MIC in areas focusing of the growth of postgraduate research programmes and academic research development, before becoming Associate Vice President and then Vice President for Research. He has held various national and international roles with funding agencies and acts as an EU Commission Evaluator for such programmes as FP7 and Horizon 2020.

Located in the John Henry Newman Campus, the Office of the Vice-President for Research comprises the Research Office and the Graduate School at MIC, generally referred to as the Research & Graduate School or RGS. As well as being a member of the MIC Executive Team and the Shannon Consortium Implementation Group, the Vice-President for Research oversees all aspects of the RGS and directs the formulation and implementation of the research and postgraduate elements of the MIC Strategic Plan and coordinates research policy. The Vice-President chairs the Research Committee of the Academic Council, and oversees central research support and administrative services for research activities.