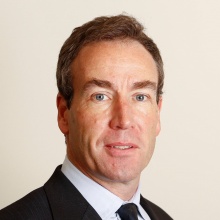 Mr Michael J Keane was born in Limerick and educated at Clongowes Wood College. He graduated from UCD in 1989 with a Bachelor of Commerce degree and then worked as an articled clerk with Coopers & Lybrand accountants (now PWC). He qualified as a Chartered Accountant in 1993 with the firm and is a Fellow of Chartered Accountants Ireland.

From 1993 to 1995 he worked for the relief and development agency GOAL in Sudan and the Great Lakes region of Central Africa. On returning to Ireland he joined Shannonside Oil Co Ltd. - an oil distributor servicing the Mid West region as Financial Controller. In 2000, he became Managing Director of Shannonside Oil. Michael studied with the Trinity College/Irish Management Institute during 2009 and 2010 earning a Masters of Science (Management) degree. In 2013 he joined Mary Immaculate College as Director of Finance and served in this role for three years. He also completed the TMP programme with the “Leadership Foundation for Higher Education” during this time.

In 2016 he was appointed Vice-President Administration and Finance at the College. He is a member of the College Governing Authority (An tÚdarás Rialaithe), reporting sub committees - Audit and Risk Committee, Finance and Resource Committee and Equality Committee and the Executive Team. He is also a Board member of the Lime Tree Theatre and sits on Audit & Risk Committee here also. He lives in Ardnacrusha, Co. Clare with his family and maintains a strong interest in local sports, in particular rugby, swimming and triathlon.