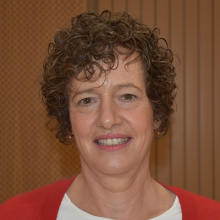 Dorothy Morrissey has been a lecturer in drama education at Mary Immaculate College since 2002. She is coordinator of the College's MA in Education and the Arts (META). Prior to this, Dorothy worked with the Primary Curriculum Support Programme (PCSP), providing professional development and curriculum support for teachers in the areas of English, visual arts and learning support. She also worked as a primary teacher in mainstream and special education and as an adult education tutor at University College Cork, teaching courses in women's studies and English literature. During her time at MIC, Dorothy has taught across a range of areas: drama education, dance, poetry, oral language, aesthetic education, arts education policy and practice, performance studies, theatre for young audiences, adult education, reflective and professional practice, teaching and curriculum studies, curriculum leadership, arts-based research and narrative inquiry.. She was commended the regional award for teaching excellence in higher education within the Shannon Consortium in 2009 and was shortlisted for the award in 2016. Dorothy has contributed to the following MIC programmes:

Morrissey, D. (2014) An autoethnographic inquiry into the role of serendipity in becoming a teacher educator/researcher. International Journal of Qualitative Studies in Education 27 (7): 837-849 [published online 22 Aug 2013].

Morrissey, D. (2018) Metaphor and narrative as teaching, learning and research strategies in teacher education. In Hanne, A. and Kaal, A. (Eds) Narrative and metaphor in education: look both ways. London: Routledge, pp. 193-207.

Kenny, A. and Morrissey, D. (2016) Exploring teacher-artist partnership as a model of CPD for supporting and enhancing arts education in Ireland: a research report. Dublin: DES and DAHRRGA. Available at: https://www.chg.gov.ie/app/uploads/2017/03/research-report.pdf

Morrissey, D. (2010) In our own image? Cultivating creativity in a culture of compliance. In: Creativity and the arts in the primary school: discussion document and proceedings of the consultative conference on education 2009. Dublin: INTO, pp.106-110.

Morrissey, D. (2009) Moving through the looking glass: a physical approach to drama and story. In Govas, N. (Ed) Proceedings of the 6th Athens international theatre/drama and education conference 2008. Athens: The Hellenic Theatre/Drama and Education Network, pp.408-416.

Morrissey, D. and MacLochlainn, M. (2017) A lens on our lives: a teacher-artist partnership project in performance studies.  Available at: https://www.youtube.com/watch?v=tJfpWzqCJsM

Morrissey, D. (2018) From Benson to Creative Ireland (1979-2019): The evolution of ‘partnership’ in the arts and education in Ireland. History of Education Annual Society Conference: Revolution, Remembrance and Re-Vision: Charting the Path of Education. Mary Immaculate College.

Morrissey, D. (2017) Troubling my quest to trouble gender. European Society for Research on the Education of Adults: Life History and Biography Network: ‘Discourses we live by’ (How) Do they benefit the world we live in? Aarhus University, Campus Copenhagen.

Kenny, A, and Morrissey, D. (2015) Exploring teacher-artist partnership as a model of CPD for supporting and enhancing arts education in Ireland. Féilte: Sharing Teaching-Connecting Learning. RDS.

Morrissey, D. (2010) Poetry, film and writing as creative processes of inquiry into the identity of the adult educator. Galway Symposium on Higher Education, NUI Galway.

Morrissey, D. (2009) In our own image? Cultivating creativity in a culture of compliance. Irish National Teacher’s Organisation Education Conference on Creativity and the Arts in the Primary School. Gorey, Co. Wexford. 13 Nov. (Invited keynote address).

Morrissey, D. (2009) Having a ball: intertextuality and the representation of femininity in Maguy Marin’s Cinderella. The Fairy Tale after Angela Carter: A Conference to mark the 30th Anniversary of The Bloody Chamber. University of East Anglia.

Morrissey, D. (2003) A model for dance education as a model for drama education. The Irish Dance Research Forum 2, The Irish World Music Centre, University of Limerick.

Hargreaves, J. (2018) A qualitative study of the value of art education in Further Education and Training (FET) (MIC).

Ryan, C. (2013) From implicit to explicit: an examination of the effects of Collaborative Strategic Reading (CSR) on the comprehension strategy usage, motivation to read and critical thinking of 3rd and 4th class children (MIC).

Cleary, M. (2012) A narrative inquiry into how the experience of learning to read transformed the lives of a learner and a teacher in adult education (MIC).

McGealy, K. (2011) An exploration of techniques used to strengthen the resilience of educators (MIC).

Makoni Fenix, P.  (2009) An investigation into factors affecting the use of Dance Movement Therapy (DMT) for children with emotional social and behaviour difficulties: a case study (Roehampton University, London: School of Education).

Neylon, J. (2007) A study into the processes involved in computer-based collaborative groupwork with second class (MIC).

O’ Reilly, C. (2007) An investigation into the dietary intake and physical activity patterns of two groups of fifth class children in a disadvantaged area in Mid-West Ireland (MIC).

Brady, O. (2003) How can puppetry, as a concrete manipulative, motivate children to show care and consideration to others?  (MIC).

MA in Education and the Arts (META)

Curran, A. (2016) Unmasking the superhero: a narrative inquiry into the construction of gender narratives in early childhood (MIC).