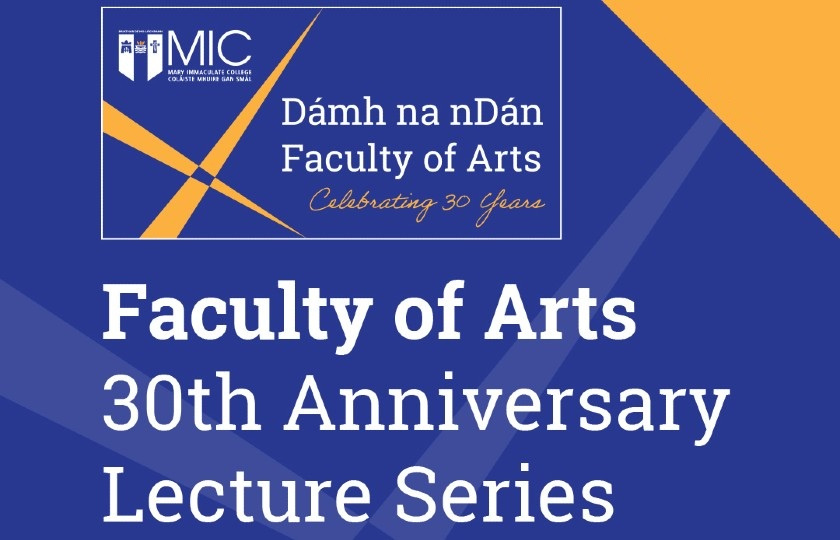 The Bachelor of Arts (BA) programme at Mary Immaculate College (MIC) celebrates its 30th anniversary this academic year. To mark the milestone, the Faculty of Arts is holding a series of free talks open to the wider public to showcase the academic excellence and varied research interests of the Faculty. The Faculty of Arts 30th Anniversary Lecture Series takes place from January to March 2023 and covers fascinating topics including history, literature, Irish, poetry, European studies and psychology. All talks are completely free and are open to everyone.

According to Professor William Leahy, Dean of the Faculty of Arts: “In celebration of thirty years of the BA in Liberal Arts, we are holding a series of public lectures which will showcase some of the excellent academics from the Faculty talking about various subjects which fascinate them and everybody is welcome. So whether you are interested in  the power of psychology, the search for the remains of the Earl of Lucan, a unique and interesting insight into the mind and life of a native Irish speaker through the literary treasure of poet Pádraig Phiarais Cúndún, learning about the unknown Irish writer and  illustrator behind a well-loved East German children's book, or the thorny question of who wrote the plays of William Shakespeare; or indeed if you just fancy a bit of brain tingling stimulation then come along and be part of our celebrations!”

The talks series opens with MIC’s Head of the Department of Psychology, Professor Niamh Stack, discussing the power and responsibility of the discipline. Psychology, at its core, seeks to better understand human behaviour in order to best help humanity. However, historically psychological knowledge, theory and research has not always been used to the best ends. More recently, psychology as a discipline has begun to acknowledge the mistakes, misuses and abuse of the past and to emphasise a commitment to social justice and the positive application of psychological science and knowledge to complex social problems. On the anniversary of 30 years of the BA at MIC, and also coinciding with the 20th year of Psychology at the College, Professor Stack will reflect on all that has been achieved in the past and explore ambitions for the future – as a discipline, a department and as a community partner. This talk will take place on Thursday 26 January at 6pm in T118 (TARA building).

The second talk in the series will see MIC’s Head of the Department of French Studies, and Honorary Counsul of France for the Mid-West Region, Dr Loïc Guyon, explore the Sarsfield Homecoming Project, the exciting search for the remains of the Earl of Lucan. Launched by Dr Guyon in 2020, the project aims to locate and repatriate to Ireland the remains of Irish national hero, Patrick Sarsfield. Following the signing of the Treaty of Limerick in 1691, Sarsfield left Ireland, along with thousands of Irish Jacobite soldiers known as the Wild Geese, and died in the service of France in 1693. Many versions of the circumstances surrounding Patrick Sarsfield's death have been circulated. What is the truth behind the myth? How could we find and identify Sarsfield's remains? After over two years of research, Dr Guyon will present his findings, update the public on the latest developments in the project and will make some exciting announcements! This talk will take place on Thursday 9 February at 6pm in T118.

Third in the series is an exploration of the life and career of Elizabeth Shaw, the unknown writer behind an East German children’s classic. Delivered by Dr Sabine Egger, lecturer in MIC’s Department of German Studies, the talk will hear of the Irish artist and illustrator with an extraordinary 20th century life story. Born in Belfast in 1920, Shaw spent most of her adult life living in communist East Berlin and worked as a caricaturist for Neues Deutschland, the newspaper of the ruling Socialist Unity Party. Shaw is best known though as an author of books for children. Generations of German children have read the picture books she wrote and illustrated, which remain in print to this day. In Ireland, however, Shaw has remained largely unknown outside of academia. With a renewed interest sparked by Dr Sabine Egger’s research to date, both Irish and British media are now beginning to rediscover Shaw as an author and artist, but even more so as a fascinating political figure. This free talk will introduce Shaw’s life and work, and raise questions about the shaping – or manipulation? – of individual biographies through research and media in different cultural and political contexts. It takes place on Thursday 23 February at 6pm in T118.

The Dean of Arts, Professor William Leahy, rounds out the talk series with an intriguing delve into the works of William Shakespeare and asks the question: Shakespeare, Man or Myth? This year marks 400 years of Shakespeare’s first folio, the collection of all of his 35 plays published in 1623, seven years after his death. But are we certain he was actually the author of those plays? Indeed, do we know much about him at all? For example, did you know that he was married to two different women on consecutive days in 1582? Or that he left none of his writing except for six scrawled signatures all of which are different? Or that when he died he did so in silence, with no reference anywhere to his passing? In this talk, Professor William Leahy will explore what we know and do not know about Shakespeare and whether we can say for certain whether he was a writer at all. This talk takes place on Thursday 23 March at 6pm in T118.

You can register your place at one of these fascinating talks here.

The Bachelor of Arts programme was first offered at MIC in 1992 and offered eleven subject choices when first established. The programme was innovative from the start as the only BA programme in the country where Media & Communications and Theology & Religious Studies were offered. Students of the Faculty now have thirteen subjects to choose from, with Psychology and Drama & Theatre Studies added in recent years. The BA is a four-year degree with three years on campus at MIC and one year on work placement and/or study abroad. The degree is flexible and comprehensive, offering numerous double-honours combinations. You can find out more about the Faculty of Arts at MIC by clicking here.