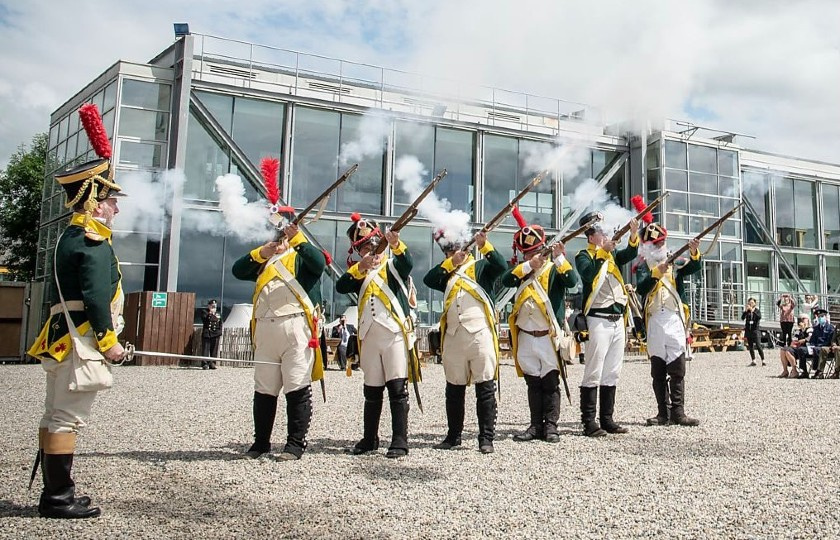 The Flight of the Wild Geese will be remembered and the long-standing friendship between Ireland and France will be celebrated in Limerick this weekend at this year’s Limerick Bastille Day Wild Geese Festival. Held between 15 and 17 July, the Festival’s busy schedule of free events includes lectures, historical re-enactments, games, music, tours and a celebration of French culture. The Festival commences on Friday with a free conference at Mary Immaculate College featuring some of the best experts on the history of the Wild Geese and of the Irish migrants in early modern Europe.

The term ‘Wild Geese’ is used to describe those Irish serving in European armies since the 16th century. The historical episode known as the ‘Flight of the Wild Geese’ refers to the 12,000+ Irish Jacobite soldiers who left Ireland for France as agreed in the 1691 Treaty of Limerick.

According to Dr Loïc Guyon, Head of the Department of French Studies at MIC and Honorary Consul of France to the Mid-West Region: “The links between Limerick and France are ancient and manifold. I recently discovered that there has been an Honorary Consul of France in Limerick continuously since at least 1816! The sieges of Limerick and the subsequent Flight of the Wild Geese represent an important episode of the relationship between our two countries since it saw French and Irish soldiers fight side by side against the troops of William of Orange and since it led to the exile in France of over 12,000 Irish men and their families. Many of these Wild Geese soldiers and their descendants ended up serving in the armies of France. I am very grateful to my colleague Dr Liam Chambers for teaming up with me, along with Dr Stephen Griffin from UL and MIC PhD candidate Tracy McCarthy, in order to bring together some of the best specialists of the Irish diaspora in early modern Europe as part of the 2022 edition of the Limerick Bastille Day Wild Geese Festival.”

Speaking in advance of the MIC conference, Head of the Department of History at MIC, Dr Liam Chambers, said: “In the aftermath of the Treaty of Limerick, signed in 1691, thousands of Irish soldiers and their extended families left Ireland for France. This was, however, part of a much wider movement of people – soldiers, students, priests, merchants, the poor; men, women and children – who migrated from Ireland to continental Europe between the 1500s and the early 1800s. Many Irish migrants also moved beyond Europe, into the expanding Spanish, Portuguese, and French Empires. This conference – Wild Geese: Irish Migrants in Early Modern Europe – offers an opportunity to hear about the latest research on the ‘Wild Geese’, as well as to reflect upon the links between Ireland’s history of migration and the nature of migration in Ireland today. Limerick is an ideal venue for the conference and we’re delighted to work with Limerick Civic Trust, Alliance Française Limerick and, of course, the Limerick Bastille Day Wild Geese Festival.” The MIC conference is organised with the support of an Irish Research Council’s New Foundations award.

The Festival moves into Limerick City on Saturday, where The Hunt Museum Garden in Rutland Street will play host to a fiercely competitive Pétanque (Boules) Tournament from 11am and later to a Living History Camp where the lives of the various generations of Irish soldiers who served in French armies from 1635 to 1815 will be re-enacted.  A guided historical walking tour of the Siege of Limerick sites will be held on Saturday afternoon ahead of the Honora French & Irish Sustainable Couture Show orchestrated by the Holman-Lee Agency in St Mary’s Cathedral at 8pm.

The headline event on Sunday is the annual ceremony and show at King John’s Castle with a parade and flag raising, supported by the Irish Defence Forces, as well as music from the Irish Chamber Orchestra, special guest Jean-Michel Veillon, students from the Irish World Academy of Dance and a performance from Legion Éire Dance Force. The ceremony will finish at 3pm, with Katie Daly’s Heritage Pub & Kitchen offering food, craic agus ceol to coincide with Limerick’s appearance in the All Ireland Hurling final.

You can find the full line-up for this year’s Festival below.

The 2022 edition of the Limerick Bastille Day Wild Geese Festival will begin with two days of fascinating talks by some of the best experts on the history of the Wild Geese and of the Irish migrants in early modern Europe. The first day of this open-to-all academic conference will take place in room T1.17 (TARA building) on the Limerick campus of Mary Immaculate College (MIC). The event is organised with the support of an Irish Research Council’s New Foundations award.

Admission is free. Registration is required via Eventbrite. Click here to register.

Enjoy another day of fascinating talks and debates in the historical surroundings of St. John’s Church. Click here for the full conference programme.

Teams from all around Ireland will compete in this year’s tournament. The prize for the winning team will be a bottle of whiskey for each team member offered by 'Friend of our Festival' Thomond Gate Irish Whiskey!

Spend the afternoon in the garden of the Hunt Museum where historical reenactors from En Garde, the Franco-Irish Historical Society, will set up their Living History Camp and make you discover the lives of the various generations of Irish soldiers who served in the armies of France from 1635 to 1815! Watch out for when they fire their muskets and pull out their swords!

Come and enjoy fantastic performances by students from the Limerick School of Music (which celebrates its 60th anniversary this year!), the Saint Mary’s Prize Band and students from dance school Scoil U Ruairc.

Eat some delicious crêpes from Bon Appétit Crêperie while learning how to play pétanque and take part in this year’s boules tournament to try to win a prize. Food, music and fun for all the family!

Guided Historical Walking Tour of the 1690 Siege of Limerick Sites

Departing from John’s Square at 3pm, local historian John Elliott will take you on a tour of the main sites of the 1690 siege of Limerick revealing the fascinating story of the men and women who fought so bravely to defend their city, including Patrick Sarsfield of course!

Duration: one hour and thirty minutes (ending at the Treaty Stone on Clancy Strand). Free for all.

Come and watch the inaugural Honora French & Irish Sustainable Couture Show at Saint Mary’s Cathedral. An amazing fashion show orchestrated by the Holman-Lee Agency with the support of the Limerick City and County Council and the French Embassy in Ireland and bringing together over thirty French and Irish designers and fashion brands around the themes of diversity and sustainability. The show is named after Lady Honora Burke, Patrick Sarsfield’s wife, whose style and charisma made a big impression on the royal court of Saint-Germain, in France, where the couple went into exile after the Flight of the Wild Geese in 1691. Click here for the full programme of this exceptional event and to book your free seat!

French Songs at the Milk Market

Enjoy a nice Sunday brunch from the usual Milk Market traders to the sound of French songs performed by Eve Stafford.

Game of Palets at Mother Macs

Come and learn how to play the French game of palets while enjoying a few drinks at Mother Macs on High Street! Great fun for all the family!

Come and watch the parade and annual flag-raising ceremony supported by the Defence Forces commemorating the Flight of the Wild Geese and celebrating the friendship between Ireland and France. The Irish, French and European anthems will be performed for the occasion by the Boherbuoy Brass & Reed Band. The parade will include reenactors from En Garde, the Society for Franco-Irish History, and members of the following veteran associations whom we wish to thank most sincerely for their participation: The French Foreign Legion Veterans Association of Ireland, the Limerick Branch of the Irish Naval Association, the I.U.N.V.A. (Post 6), the Patrick Sarsfield Branch of the O.N.E. and the Limerick Branch of the Royal British Legion of Ireland.

Watch the Legion Éire Dance Force perform a stunning choreography and enjoy the performance by the Irish Chamber Orchestra, special guest Jean-Michel Veillon, and students from the Irish World Academy of Music & Dance, of Symphony 32 / Siansach 32, an original piece of music written by French composer Erick Falc’her-Poyroux in honour of the centenary of Ireland’s partial independence and conducted by Franco-Irish maestro Robert Houlihan. This exceptional event is part of Limerick’s Decade of Centenaries programme and the University of Limerick’s UL50 series of events and is organised in partnership with the French Embassy in Ireland and the Irish World Academy of Music & Dance, with the support of GIS E.I.R.E., the French Society for Irish Studies (SOFEIR) and Fondation Nantes Université.

Watch the Hurling Senior Championship Final and end the evening by enjoying good food and drinks from 'Friend of our Festival' Katie Daly’s Heritage Pub & Kitchen while listening to great traditional music and songs by the Saint Mary’s Men’s Shed.