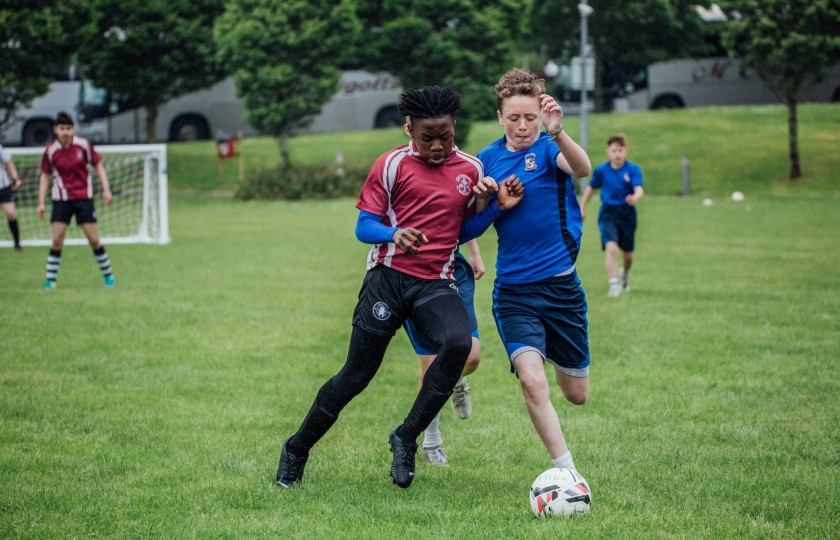 CBS' Mduduzi Ncube and Le Chéile's Thomas Ryan jostle for the ball during the boys final.

The Premier League may have wrapped up in dramatic fashion last weekend, but it was all to play for in Mary Immaculate College (MIC) on Wednesday when Limerick primary school pupils went head to head for the chance to be crowned League of Legends champions.

Held for the 12th time this year, the League of Legends soccer blitz saw over 130 fifth and sixth class students from twelve local primary schools tog out for a highly competitive day of soccer. The annual tournament is a joint venture between the Transforming Education through Dialogue (TED) project, an MIC initiative with primary and post-primary schools, and the PLUS schools network comprising representatives from fourteen local schools. Based within the Curriculum Development Unit at MIC, TED engages with the schools in activities and programmes throughout the school year.

Welcoming the pupils to MIC before the games kicked off was Assistant Dean of Education, Dr Angela Canny, who said: "The League of Legends is a wonderful highlight of the year for the TED project as it provides us with an opportunity to welcome the children, principals & teachers from the PLUS network of schools to MIC, and celebrate the sense of community that is facilitated through the network. We are also delighted to launch the Book of Belonging Art exhibition, which many of the boys and girls here were involved in over the last year with our artist, Sheila Richardson. It is therefore a day to celebrate the sporting and artistic achievements of the wonderful children from our local schools and to provide an opportunity for them to explore and spend time in MIC and hopefully feel inspired to come back as future students and continue their educational journey."

The thrilling tournament was held on four pitches on MIC Limerick's sports field and eventually narrowed the teams down to a final two in both the girls' and boys' competitions.

St Anne's Girls Primary School faced Le Chéile's girls outfit in the first final where a very tight contest saw the teams deadlocked, until Le Chéile's captain Kelsey O'Shea broke through and scored the winning goal for her side, with it finishing 1-0. 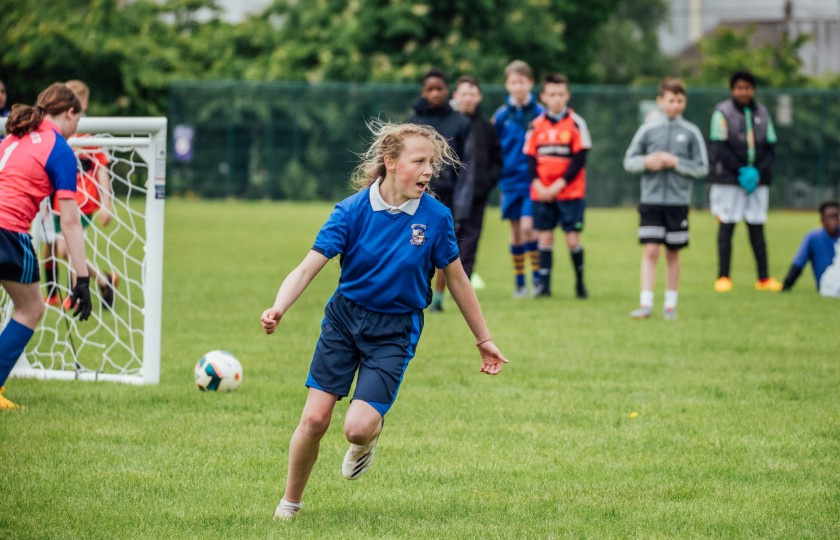 Le Chéile's boys faced Scoil Iosagáin's CBS Primary School in the second final as they hoped to bring home the double, although an early brace from CBS captain Mduduzi Ncube left them with a tough challenge in the second half. Le Chéile's desire was strong and a brilliant run from Paddy Casey found the back of the CBS net and signaled a come-back was underway. Despite continuous pressure from their rivals, the CBS defense was solid and that one finished up 2-1, with CBS crowned Champions. 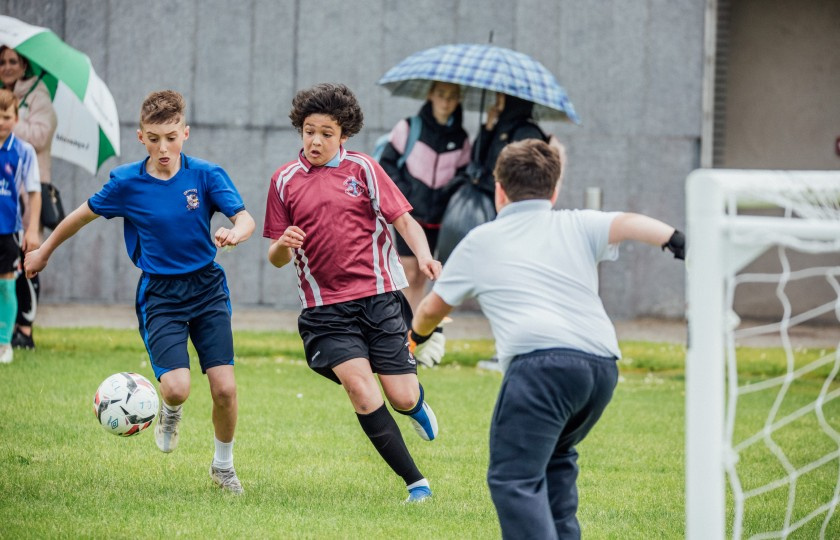 Vice-President of Governance & Strategy at MIC, Professor Gary O'Brien presented the finalists with their medals and congratulated them on the thrilling day of soccer. Speaking after the finals, Professor O'Brien said: "It is fantastic to welcome local pupils back to MIC for the League of Legends tournament, which is always a highlight of the year. The energy, skill and enthusiasm from all those who took part was wonderful to witness. A special thanks to the teachers and coaches that are joining us in partnership to make sure the children get a chance to show off their sporting prowess and have fun. I hope we see some of them back at MIC as students one day." 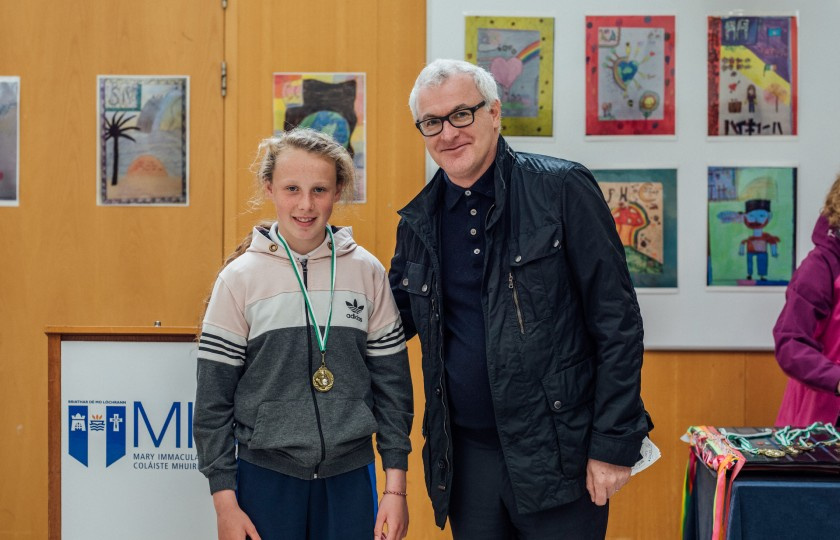 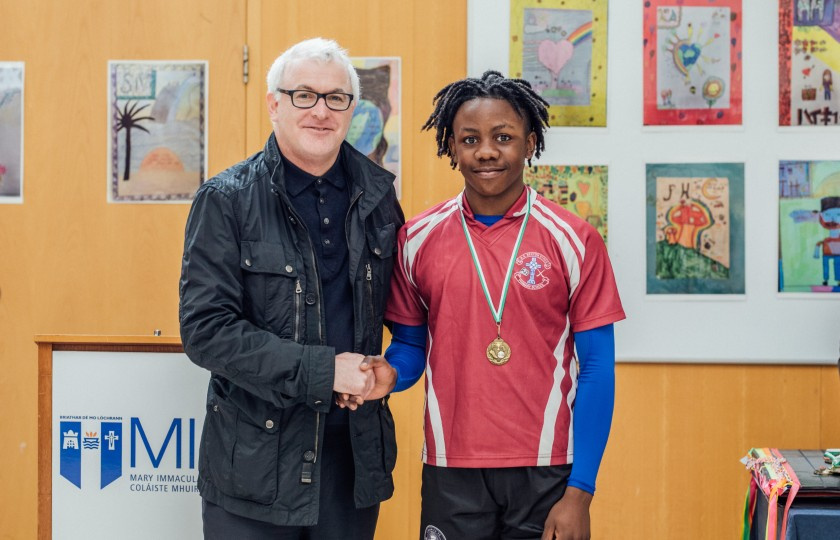 CBS' captain and Player of the Match, Mduduzi Ncube, with Professor Gary O'Brien 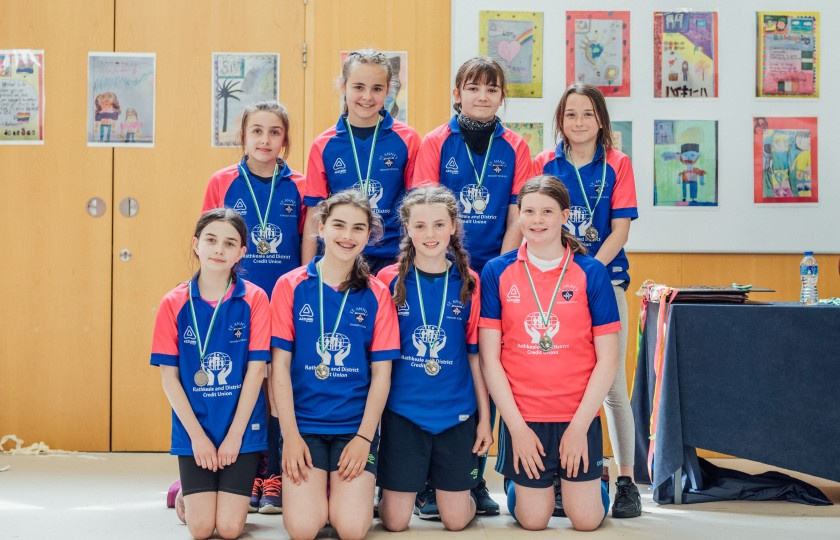 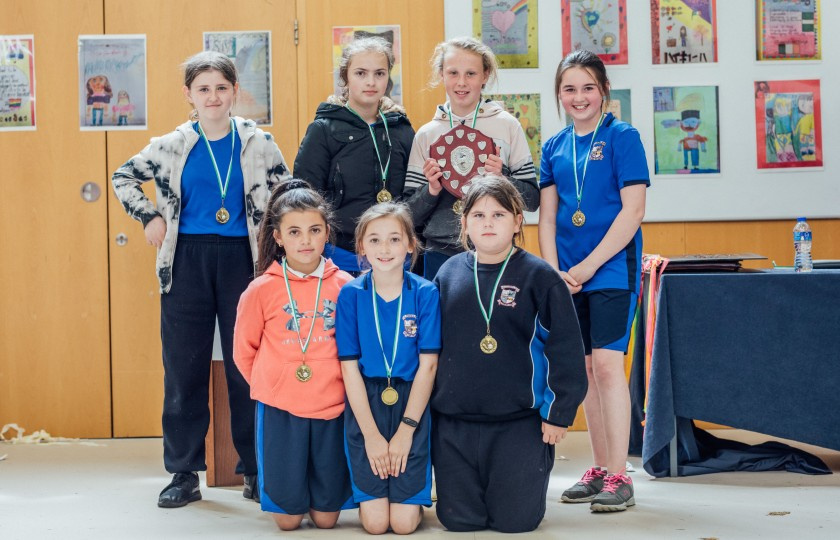 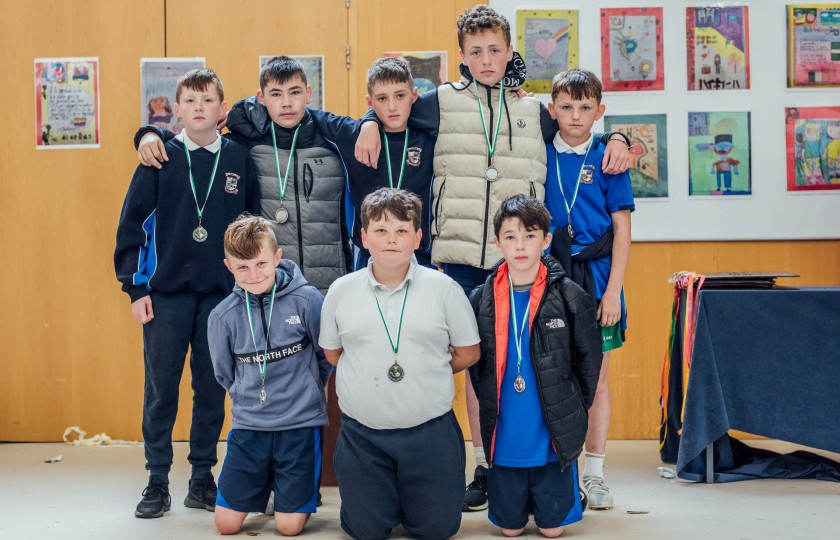 Artwork from participating schools was also on display at the tournament. As the League of Legends tournament was missed in 2020 and 2021 due to COVID, pupils turned their hands to painting instead to prepare The Book of Belonging. Curated by MIC's Lecturer in Visual Arts, Sheila Richardson, the art exhibition is a display of art work that children from 10 schools created last June. The project was inspired by The Book of Kells and The Great Book of Ireland and explored themes of identity, belonging and connection during COVID and a time in Irish society when people could not connect with each other. Sheila delivered online workshops for children from 1st to 6th class from across the 10 schools involved and The Book of Belonging is a culmination of over 120 pieces of wonderful art work produced by the children. Many of the children participating in the League of Legends also took part in the art project. The schools involved were: Le Chéíle National School; Our Lady of Lourdes National School; Our Lady Queen of Peace National School; Presentation Girl’s School; Scoil Iosagáin CBS; St. Anne’s Girl’s School; St. John’s Girl’s and Infant Boy’s School; St. John the Baptist Boy’s School; St. Mary’s National School and Thomond Primary School.

Speaking at the League of Legends tournament on Wednesday was TED Project Coordinator, Ruth Burke: "The TED Project is thrilled to once again host our annual League of Legends Soccer Tournament after a 3 year hiatus due to COVID. We love welcoming the children, teachers and principals to our beautiful campus for a fun filled day and to avail of the wonderful facilities of the Tailteann Sports Complex. This year we were delighted to also work in collaboration with the Limerick Sports Partnership Active Cities initiative, who very kindly sponsored prizes for the children."

Further information on the TED Project can be found by clicking here.