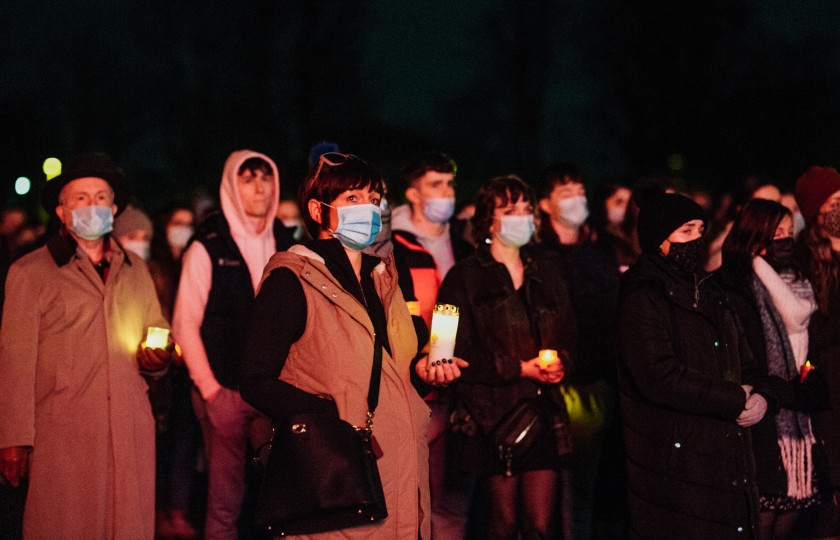 Friends and family of Ashling Murphy were among the hundreds who gathered with staff and students of Mary Immaculate College on Monday evening to remember her at a special Candlelight Vigil.

Jointly organised by Mary Immaculate College (MIC) and Mary Immaculate Students’ Union (MISU), Monday’s event was held to coincide with the return of students to campus for the first time since Ashling’s tragic death.

MISU Vice-President, Aoife Gleeson, who MC’d the event, expressed her deepest sympathies to Ashling’s family and friends, and on behalf of the MIC student community said: “This evening is an opportunity for us to join together as a student community, the MIC community and the local community to remember Ashling and to show our support for her loved ones.  Ashling was committed to her family, to her teaching, to her music and to her fashion.  She was a member of our community during her time in MIC and will always remain so”. 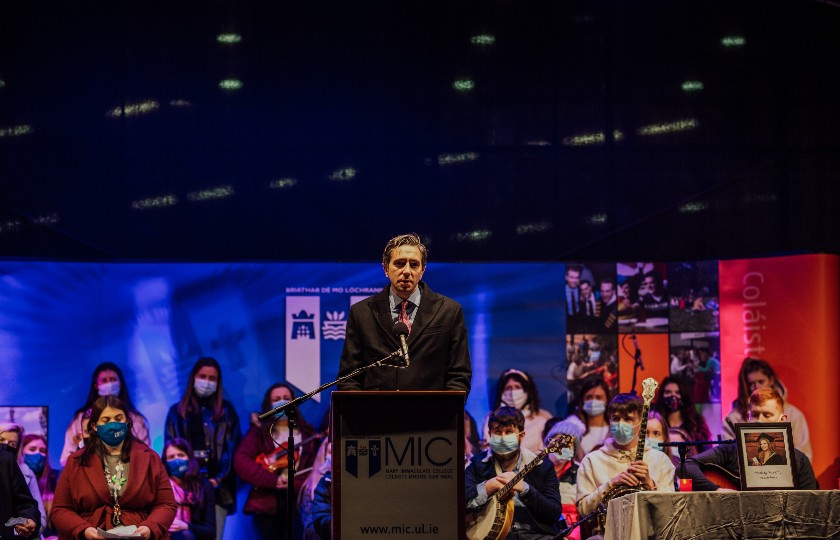 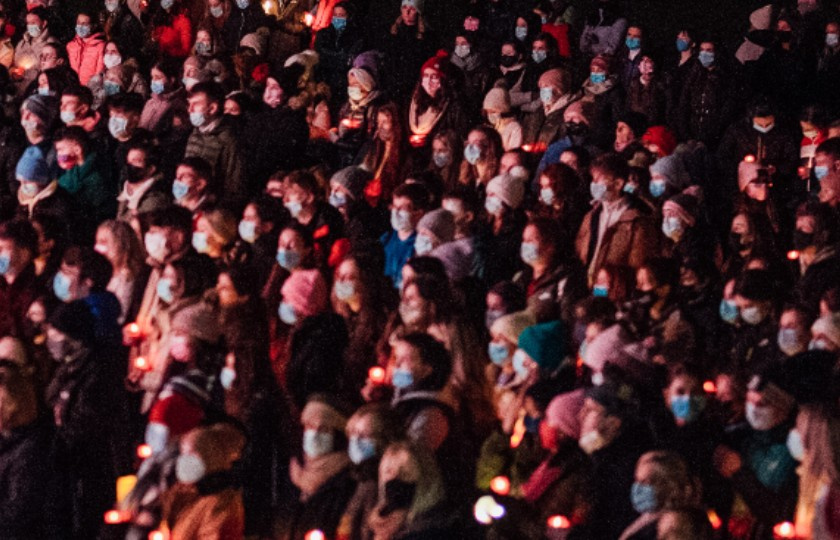 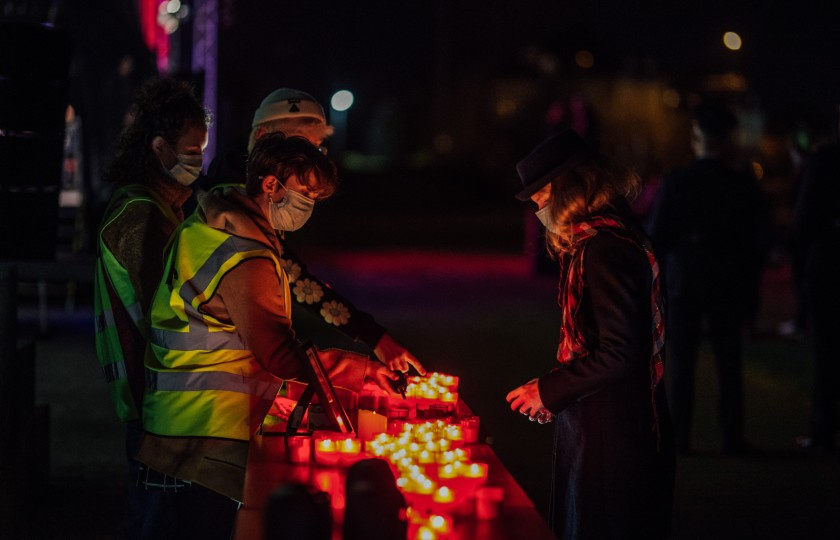 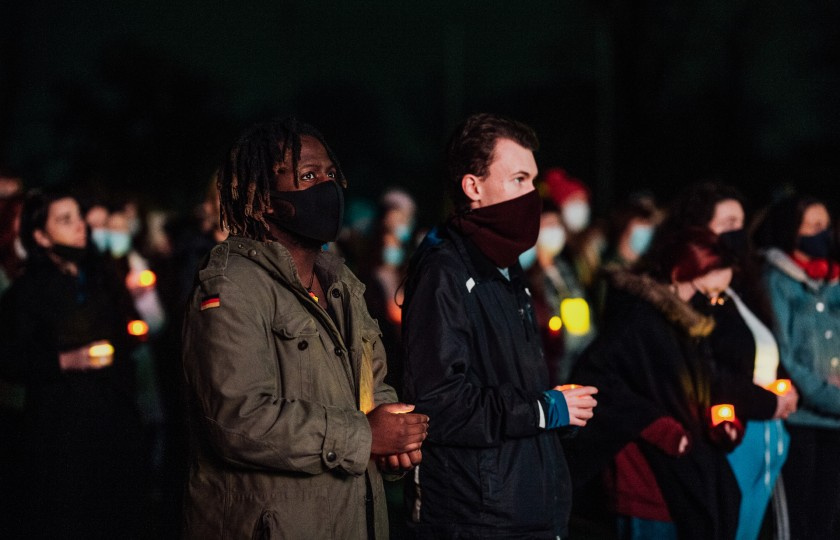 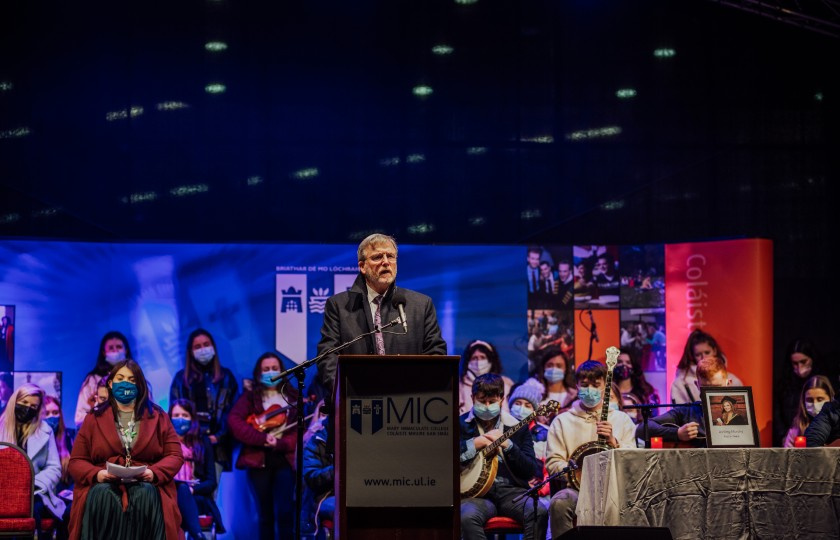 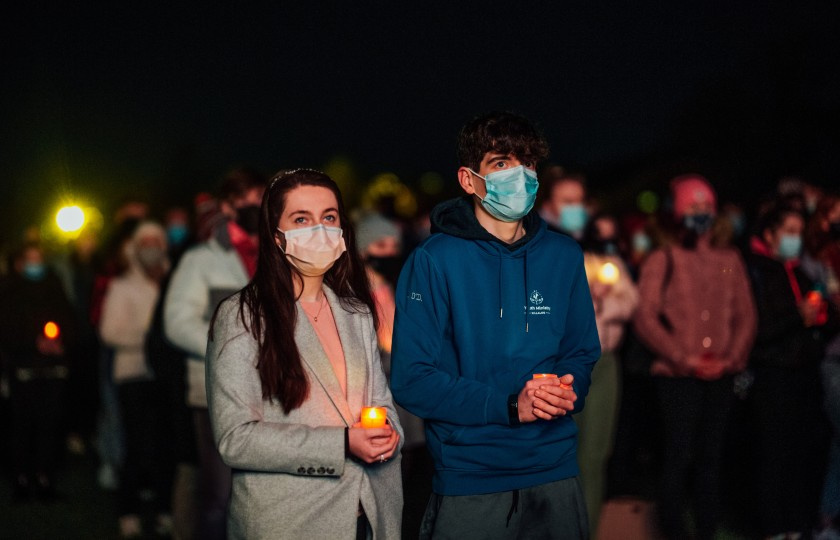 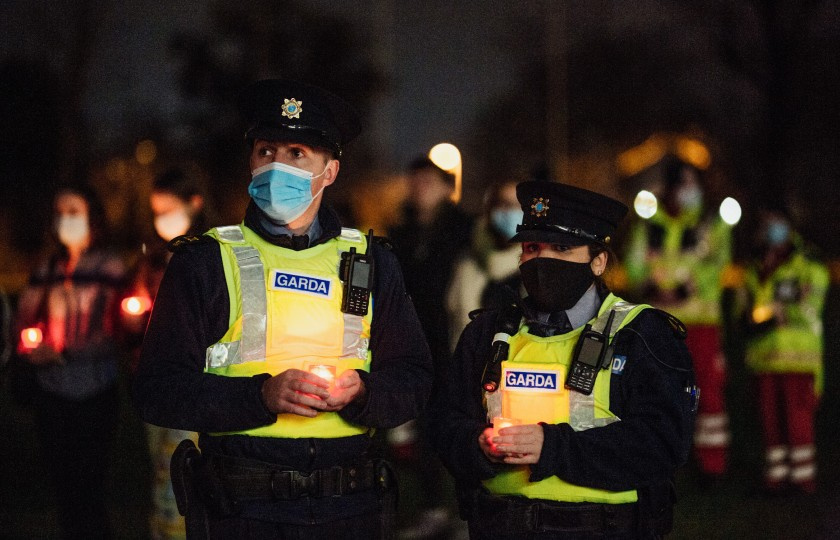 Minister for Further & Higher Education, Research, Innovation & Science, Simon Harris TD, attended the event and addressing the crowd explained: “I wanted to be here because I’m a man, a father, and a politician, and I know that our gender, and our profession, need to do better, we need to do much more. As fathers of young sons, we have a duty in how we raise them, in how we ensure they are part of a cultural change; as politicians we have got to change the system.

Mayor of Limerick, Cllr Daniel Butler, also spoke at Monday’s vigil as he reflected on the shock felt by the entire community by Ashling’s death: “The murder of Ashling Murphy has affected us all and our thoughts are with her family and friends and those closest to her as they begin to pick up from fragmented pieces of their lives and move on without her. Her death has left a massive hole in the lives of her family, friends, colleagues and pupils, a loss that still remain so utterly incomprehensible. The murder of Ashling has sent shockwaves through our society and shone a light on the safety of women. This candle light vigil is sending a powerful message to those in authority that something must be done to protect women.” 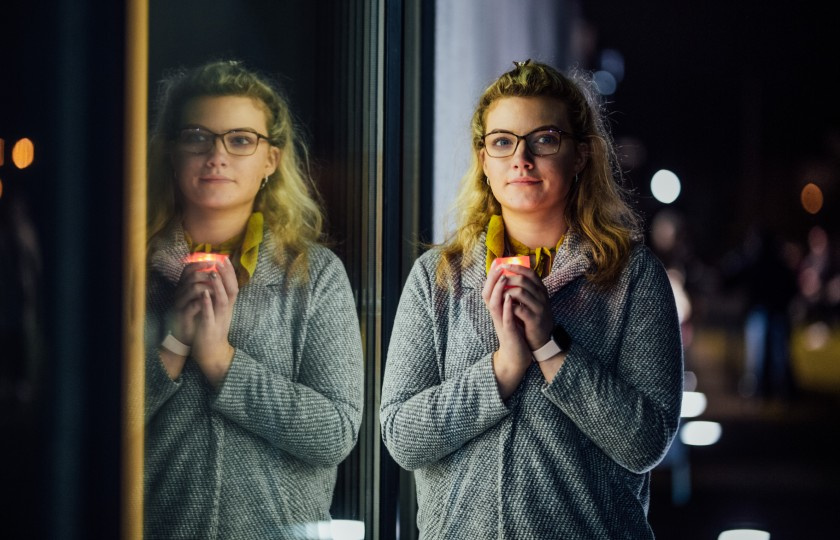 Ashling was remembered as “out-going and carefree, someone who had everything going for her in life” by her college friends Laura Murray, Aoife Ní Shé, Nessa Murray and Tracey Murphy, who graduated with her just four months ago, in October 2021. Poignantly, Monday’s vigil was held just metres from the same spot where Ashling received her parchment. Speaking at the vigil, Laura recalled their time at MIC: “Ashling and I always talked about how we hoped of getting enough points in our Leaving Cert to get into Mary I, as all she ever wanted to do was become at teacher, which she was born to do. She was so admired by many in our class and year group also. Natasha, our classmate, recalled to us last week how ‘if you walked into class alone and didn’t know where to sit, you’d go straight for Ashling’s table’, which highlights Ashling’s warmth and kindness to everyone she met.” 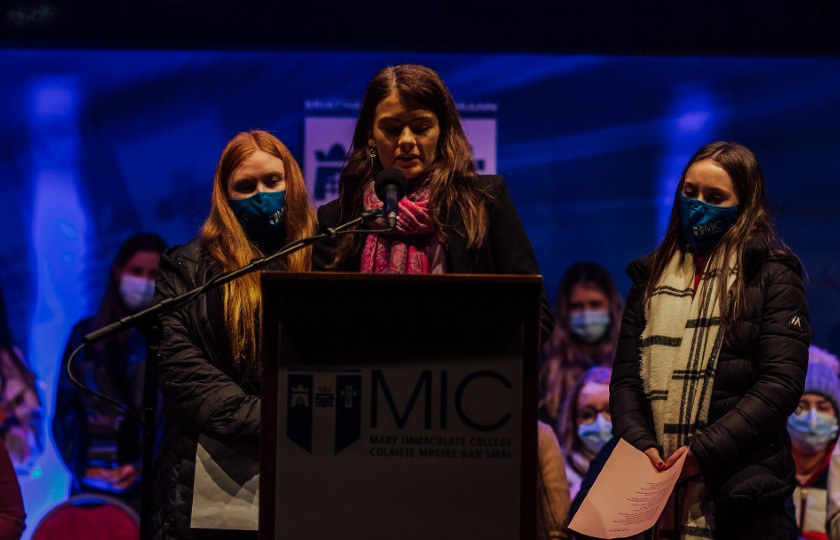 The gathered crowd also heard of Ashling’s academic achievements. Remembering her was Dr Ailbhe Kenny, who lectured Ashling in Music during her time at MIC: “Ashling was a hugely generous person. She shared her skills, knowledge and gifts widely. She supported her peers academically, she was a fellow musician in a trad session, she was a teammate on the pitch, and she was a good friend. In particular, her musical generosity was exemplary. Ashling demonstrated so well what a full college life looks like. It is my hope that all students here at MIC immerse themselves in their courses of study, be present, share, play, run, and open themselves up to rich experiences while at MIC; just as Ashling did. Do not allow fear, anger, grief or sadness get in the way of any of that.” 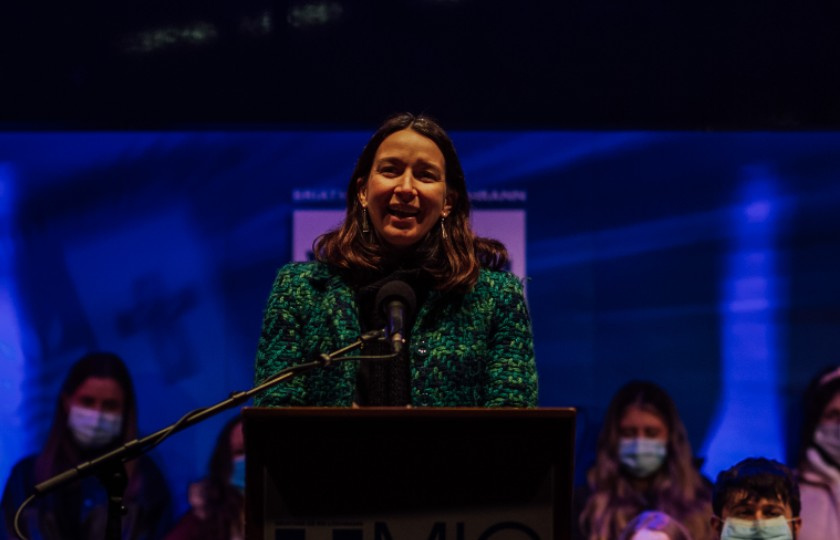 Remembering Ashling was the President of MIC, Professor Eugene Wall, who said: “We gathered here tonight ‘with one accord and in one place’ to mourn the loss of Ashling, to pay tribute to her, to honour her memory and to express our heartfelt solidarity with her grieving family and partner. Ashling exemplified the qualities of what it means to be an excellent primary teacher. She was warm, vivacious, caring, conscientious and so lavishly talented.”

Continuing, he told the crowds gathered that he had promised Ashling’s parents at her funeral that MIC would continue to cherish Aishling’s memory and he announced details of the creation of an Entrance Scholarship in her memory which, will take account of her special talents. 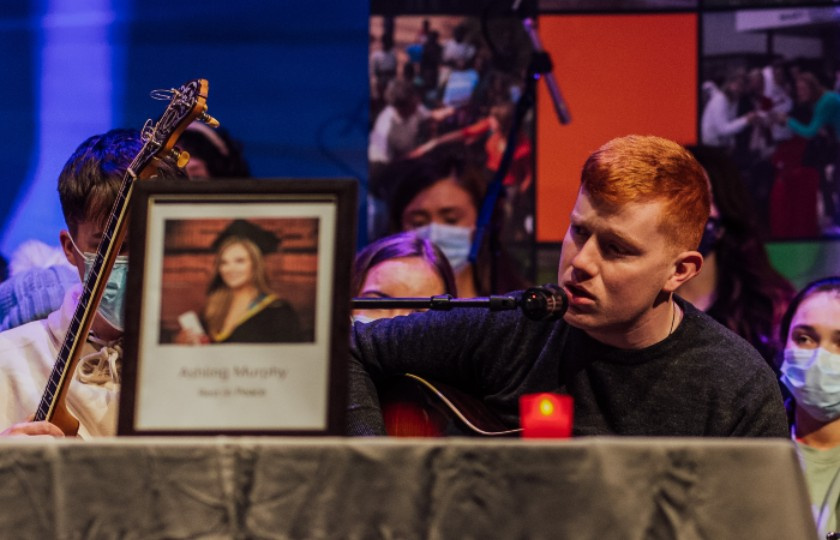 The ceremony, which was attended by Ashling’s family members Raymond, Kathleen, Cathal and Amy, her partner Ryan, Kieran O’Donnell TD and Senator Maria Bryne, also featured music by MIC staff and the MIC Trad Society, including a rendition of Ashling’s favourite song, ‘When You Were Sweet Sixteen’.