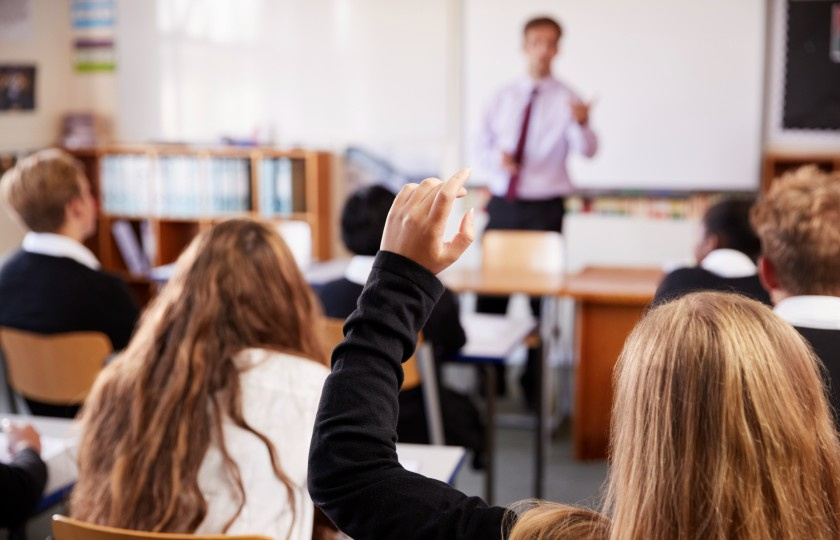 A new report into the experience of non-religious teachers in schools with a religious ethos on the island of Ireland has made three important recommendations to ensure equality of opportunity for those in the post-primary teaching sector.

The Non-Religious Teachers in Schools with a Religious Ethos in the Republic of Ireland and Northern Ireland: Experiences of Recruitment and Promotion Processes report is the culmination of research from Dr Catherine Stapleton, Mary Immaculate College and Dr James Nelson, Queen’s University Belfast. The report was funded by the Standing Conference on Teacher Education, North and South (SCoTENS), a network of 24 colleges of education, university education departments, teaching councils, curriculum councils, education trade unions and education centres on the island of Ireland with a responsibility for and interest in teacher education.

The newly published report looks at how teachers are navigating religious expectations of them in the workplace and how the religious ethos of a school may affect the recruitment process for post-primary teachers. In the research, a sample group of non-religious teachers were asked about their experiences and whether there were religious factors at play in the selection or interview processes when they applied for jobs in schools with a religious ethos. Their responses indicated that not only was the use of religious profiling in the recruitment process evident, but that this pressure may continue throughout employment.

According to those interviewed, on graduation, non-religious teachers enter a system where, in most schools, religious belief is held to be the default position. The sample group also stated that it is common for applicants to denominational schools to be asked to signal support for the religious ethos of the school on application forms or at interviews with those who contributed to this research saying they had no indication of the consequences of supporting or not supporting a schools’ religious ethos. The response from those interviewed for this research indicates some teachers may choose to feign belief or offer a vague acquiescence to secure employment. The research also indicates that the focus on the religious ethos extended beyond the interview process and into the annual schedule of the school, with some teachers expected to participate in religious activities throughout the year.

Schools in both the Republic of Ireland and Northern Ireland are exempt from employment equality legislation in relation to religion (NI Fair Employment and Treatment Order 1998; Irish Employment Equality Act 1998-2011, Section 37 [1]). Yet, the extent to which schools exercise this right is unclear, especially at post-primary level. Exemptions for such schools exist in other states, such as in Scotland where the report authors highlight the case of Glasgow City Council v. McNab.

According to report co-author Dr Catherine Stapleton, Lecturer in Education at Mary Immaculate College European legislation limits the exemption from equality law to those posts for which religious belief is a ‘genuine occupational requirement’. In the case of Glasgow City Council v McNab, a teacher’s claim of discrimination was upheld when the tribunal ruled that being a Catholic was not a genuine occupational requirement for a pastoral post in a Catholic school. She goes on to state that: “Our findings show that in Ireland, however, the exemption from equality legislation is applied widely to all posts in denominational schools and those schools with a general Christian ethos. Ultimately, it would appear that this may lead to the creation of a culture in which non-religious teachers may feel there are limits to the types of schools and roles they can apply for.”

The report’s authors recommend three important changes: Firstly, the removal of any practices in the recruitment process that may involve religious profiling of candidates, except for when a genuine occupational requirement for a post exists and that the role is advertised as such.  Secondly, the creation of clearly defined designations for schools which give explicit expression to the role of religion within the school. Thirdly, an opt-out from religious activities on the grounds of conscience should be available for teachers in all school-types in order to allow for plurality and proportionality within the system.

Dr Stapleton draws a similarity between the religious element in the recruitment process for post-primary teachers and the recently removed ‘Baptismal Barrier’ in primary schools: “The 2018 School Act saw the removal of the Baptismal Barrier which meant most primary schools could no longer consider religious beliefs in their admissions policies. Comparably, the use of a candidate’s religious belief in the post-primary recruitment process is the next hurdle we need to address to support equality of opportunity. The recommendations support the ideal of supporting peoples’ right to religious practice and freedom, not by denying anyone’s right but by making space for a diversity of beliefs.

According to report co-author Dr James Nelson, School of Social Sciences, Education and Social Work at Queen’s University Belfast: “The proposed changes we suggest in this research would provide important safeguards for non-religious teachers, but the participants also agreed on the need for a culture shift within schools to create an environment where a teaching force with diverse beliefs, including non-religious perspectives, is seen as an asset and a strength rather than a threat.”

The full report can be found here.