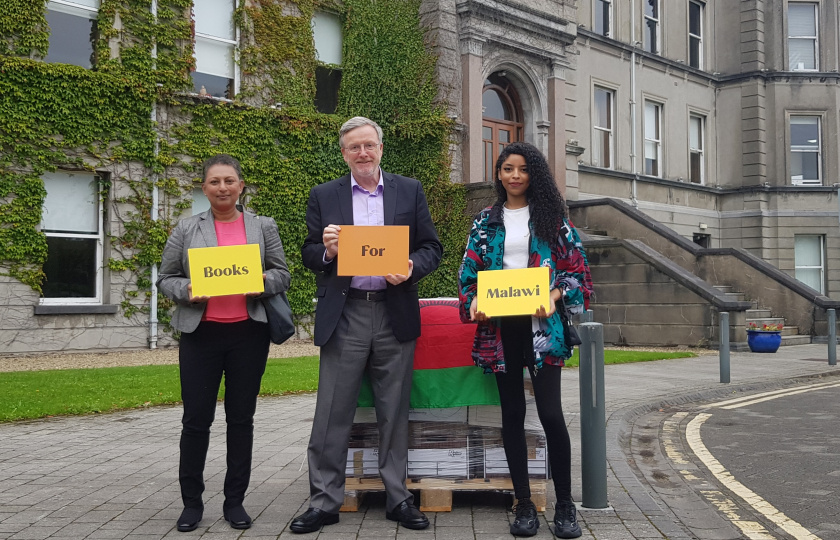 The Malawian Ministry of Education has dubbed the ‘Halla’ at Mary Immaculate College Limerick “a space of educational hope” after the College provided the facility for the Midwest Migrant Community Network (MMCN) to pack several thousand books to send to schools and higher education institutions in the southern African country. As part of the Books for Malawi project, nearly 240 boxes of much needed, donated books and educational resources from libraries, local universities, private and school donations have been shipped to Malawi.

Santhi Corcoran, a part-time lecturer in MIC and Malawian native, Ann Nyandovi Piercy of Gender Orientation Sexual Health HIV (GOSHH), co-founded MMCM in March 2020. According to them, the book drive—with shipping and costs funded by the JP McManus Benevolent Foundation and Limerick City & County Council—was inspired by conversations with the Ministry of Education in Malawi and the Irish Embassy.

“We were very cognisant that books were a premium and important necessity in Malawi as they have very expensive internet availability. As Malawi has an English-speaking education system, we carefully researched and agreed to send general history, geography, maths, and English books as resources for school libraries. We were also able to secure academic books from MIC librarians at Limerick and Thurles and the University of Limerick, as well as a broad range of general materials from Limerick’s council librarians—who prepared around 90 boxes for us. The books, packed by a team of MMCM volunteers and MIC Building & Estates staff, will be sent to rural and urban schools and college campuses across Malawi.”

Knowing that the Malawian population is “hungry for education”, our Malawian counterparts emphasised that most students often “depend on the help and support of family and friends, living within and abroad, to help them with access to research resources, books and other general reference materials”.

“Books are therefore a very critical educational resources for school-age children and college students to the extent that reading materials are highly sought after and appreciated by any age group. It is therefore hoped that this project will fill a substantial gap in resources for those in education, both formal and informal, and those who would like to keep abreast of and improve their knowledge in areas of interest. We have been overwhelmed by the response to the appeal and particular thanks to Cllr. Elena Secas, who helped to get local authority funding, and OBW Technologies on the Ballysimon Road, which donated all the packing boxes.”

Counterparts and colleagues in the ministry of education in Malawi, are very pleased with this gesture of friendship and goodwill from Ireland that will contribute to the education path for learners of all age categories in Malawi.

Prof. Eugene Wall, President of Mary Immaculate College, said that MIC “is very happy to be associated with this wonderful initiative co-organised by our colleague Santhi Corcoran”.

“This initiative builds on our collaborations with the Ministry of Education in Malawi and our recent conversation with the Irish Ambassador to Malawi, H.E. Seamus O’Grady. Developing opportunities to learn from each other through North-South partnerships such as this aligns with our internationalisation objectives and the Books for Malawi initiative reflects the College’s strong commitment to social justice.”

Diarmuid McClean, Deputy Head of Mission, Irish Embassy Malawi, added: “The Embassy is aware that availability of books in general and books for education in particular fall well short of needs in Malawi. These valuable books will be a most welcome boost to education in the country. Well done to all involved.”

MIC is also forging links with Malawi in terms of educational exchanges. Student teachers at MIC Thurles met virtually with Malawian counterparts this year and some Malawian teachers are hoping to pursue postgraduate study at MIC in the near future. It is a much-valued collaboration in mutual learning and sharing of knowledge in education practice. We have much to learn from each other.

As well as meeting educational needs in another continent, materials donated that may better suit, or be of value locally will be donated to communities that may equally need educational materials. Books have also been donated to a Direct Provision facility in Limerick, via local NGO Doras.

Main Photo (L-R): MIC lecturer and co-founder of MMCN, Santhi Corcoran; President of MIC, Prof. Eugene Wall and Mona-Lisa Das, a member of the coordinating and organising group of Books for Malawi and daughter of MMCN co-founder, Ann Nyandovi Piercy in front of one of the many pallets of books that were shipped to Malawi recently. 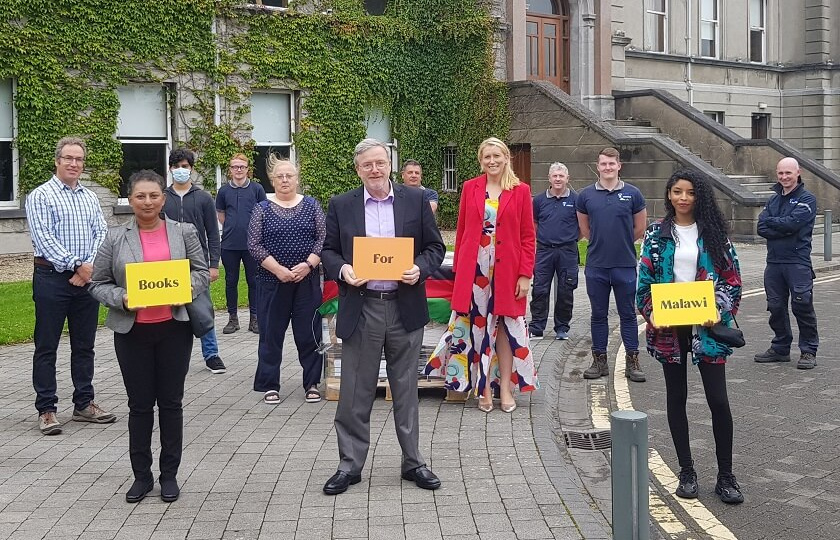 Photo above: MIC lecturer and co-founder of MMCN, Santhi Corcoran; President of MIC, Prof. Eugene Wall and Mona-Lisa Das, a member of the coordinating and organising group of Books for Malawi with MIC staff who assisted with the project in front of one of the many pallets of books that were shipped to Malawi recently.

Participating suppliers/donors of books & other supplies were: