MIC Teams Up with RTÉ on ‘After School Hub’ 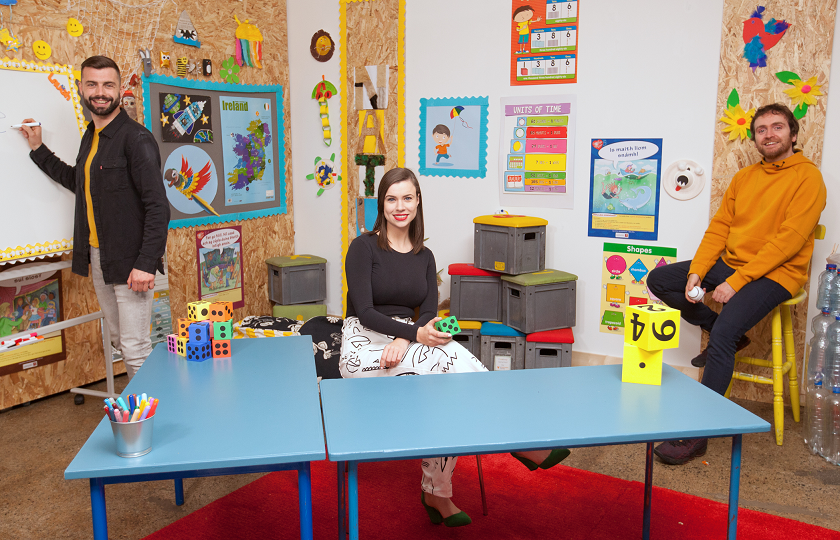 Following the phenomenal success of RTÉ’s ‘Home School Hub’ earlier this year, múinteoirí Ray, Clíona and John have returned to our screens this week for a new daily after-school show. Supported by Professor Emer Ring, Dean of Education at Mary Immaculate College (MIC) and members of the Faculty of Education, ‘After School Hub’ aims to bring much-loved afterschool clubs into living rooms across the country.

The new series, which will be broadcast weekdays on RTÉ2 from 3pm to 4pm, will draw on the expertise of Professor Emer Ring and others in MIC’s Faculty of Education who have volunteered to support the presenters and production team, Macalla Teo, as the need arises.

Welcoming the return of RTÉ’s educational programme for primary children, Professor Emer Ring said, “I look forward to supporting the programme together with colleagues across the Faculty of Education and to contributing, in a very small way, to enriching children’s lives at a time when COVID-19 restrictions have impacted on children’s access to after school activities and opportunities to socialise with each other.”

She added, “Historically, in times of crisis, children have been among those most impacted. We are delighted at MIC to be associated with an initiative that focuses on supporting children and families at this time and continues the long tradition of the value with which we hold education here at MIC.”

MIC graduate, Ray Cuddihy, is also returning to the show following his successful run as one of the three presenters. Now a household name, the Cork native relished the challenge, innovation and vision needed to create ‘Home School Hub’ and is looking forward to getting back in front of the cameras for the new series.

Outlining what children can expect from ‘After School Hub, he said, “This show will feature activities that many schools may not be able to provide in times of restrictions, so we will have lots of art, drama, PE, music, comedy, and chats. We are very aware that kids will be after a long day at school by the time they get to our show, so it will be very relaxed and lots of craic! As always, we bear in mind the different settings that kids will view from and aim to make the show as inclusive as possible.”

Mairéad Fitzmaurice, who graduated from MIC in 2019 as a primary teacher and who is currently studying on the MA in STEM Education at MIC, is also returning as researcher for the new series. She said, “I really enjoyed my time working on ‘Home School Hub’ and I am really looking forward to working on this new aspect of the show for the second series. I am also thrilled to be working with Professor Emer Ring for the new show and the many other members of MIC’s Faculty of Education”.

According to Professor Emer Ring, ‘Home School Hub’ emerged among the champions of the COVID-19 crisis. Commenting on the success of show, she said, “We need to remember the rapidity with which children’s lives changed as the familiarity, security and predictability of the pre-school or school day disappeared. Múinteoirí Ray, John and Clíona provided much-needed reassurance and exceptionally high-quality learning and teaching experiences for our children throughout this crisis. They successfully replicated the classroom so that children had an opportunity each day to spend some time in a familiar environment.”

Commenting on the positive reaction to the first series, Ray said, “I think there was a novelty and curiosity factor that led to the show being popular initially, but from there we did form a real connection with our audience. On the first morning of broadcast we received an email from Professor Ring and she simply pointed out the importance of the show being broadcast from a normal classroom. I believe that this is what we became as well, it was a show that was gently paced and comforting for our young audience. Just like any teacher in the country, our first role was to help kids to feel safe and understood. Children were active participants in the show and it gave the whole production so much energy. It was powerful.”

Commending the team behind ‘Home School Hub’, Ray said, “My experience on the show was wonderful. I deeply trusted the team working on it and I even got to work with some of my genuine heroes, like Professor Emer Ring. As teachers we were the main drivers of the show – not only did we present the classes, but we also selected and produced the content of the show. We were trusted with a great deal of creative freedom, and it really worked.”

As the show returns today, Ray is keen that the show once again finds the right tone of comfort and inclusion for the children tuning in throughout Ireland. He said, “We see a lot of anxiety among adults these days, and so we inevitably will in kids too. This programme is a proven way of communicating the message of safety and assurance, as well as fun and learning.”

For more information and a range of interactive activities, visit www.rte.ie/learn.