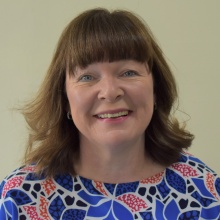 Úna Ní Bhroiméil  lectures in American history at Mary Immaculate College, University of Limerick. She graduated from NUI Galway with a BA in History and Irish, an MA in History and a Higher Diploma in Education. Úna earned her PhD at Lehigh University, Pennsylvania  and her thesis was published by Four Courts Press in 2003 entitled Building Irish Identity in America 1870-1915 – The Gaelic Revival. She has been the co-ordinator of the Taught MA programme in History in MIC since setting up the programme in 2008 and she has examined, supervised and mentored MA and PhD students in American and Irish American history. Úna has been a vigorous contributor to  and an elected representative on numerous governance and academic committees in MIC.

Úna’s publications and research output focus on the forces that shape and signify cultural identity. These forces include: migration and trans-nationalism, the Press, political cartoons, photographs and the visual arts, public policy as regards teaching and education and the role of public players and brokers of influence. She specifically studies the use and critical interpretation of newspapers and the published word including women’s and religious magazines. Some of her recent publications include:

She is a regular presenter at national and international conferences such as the American Conference for Irish Studies (ACIS), the Society for the Study of Nineteenth Century Ireland (SSNCI) and has presented papers at American Historical Association (AHA), International Visual Sociology Association (IVSA) and American Educational Research Association (AERA) conferences.

Among her current research interests is the New York Irish-American lawyer and influence-broker John Quinn who was a patron  to literary figures and artists such as WB Yeats, James Joyce, TS Eliot, Augustus John, Marcel Duchamp and Picasso among others. Úna was awarded a Gilder Lehrman Senior Fellowship to continue her research on Quinn in the New York Public Library and is currently completing a book on Quinn.

Úna is a frequent presenter and historical expert on a range of related topics in the media in English and as Gaeilge – especially on television. She presented series 2  of Tríd an Lionsa - the documentary on historical photographs in 2018.